Join us for an artful dodge around London’s hippest quarter, discovering the Top 6 grooviest graffiti in London.

A leisurely stroll along any London street is always a breath of fresh air for those who live for the extraordinaire. There’s a pulsing energy and restless vitality that stirs the soul. Like a living, breathing art gallery, every twist and turn reveals life’s vibrant colours, ready to be devoured by the senses. It’s our kind of town, fizzing with refreshing possibilities (a bit like our water really). And if you know where to look, unexpected masterpieces are waiting, displayed majestically on the walls of this big, bustling metropolis, all set to be discovered by those with a nose for the out-there and eccentric.

So come with us as we take a take a walk on the wilder side of art, through a golden mile of glorious graffiti in Shoreditch, London’s original hipster hotspot. Here are 6 works of genius that caught our eye along the way:

Our off-the-beaten-track tour begins with a bubbly beauty, on Whitby Street, E1. Painted by Aussie artist Jimmy C (AKA James Cochran) in his signature aerosol pointillist technique (painted entirely from blobs of spray paint), it’s a stunning way to kick things off. Like his style? Check him out on Instagram here

Onwards to Sclater Street, where you’re hit slap-bang in the eyeballs with a full on kaleidoscope of pop surrealism, courtesy of Okuda, a Spanish artist whose multicolored ephemera evokes the universe, the infinite, even the meaning of life (if you look close enough). Plus, it’s really rather cute, you have to admit. See more of his gorgeous, uplifting positivity, right here

Take a right on to the famous Brick Lane (where you could stop for a quick curry, washed down with a refreshing bottle of sparkling Perrier) and you’ll see a masterpiece magnifique adorning a wall just across from Grimsby Street. Painted by French graffiti maestro, Zabou who specialises in humourous, thought-provoking work that pokes fun at conformists, it’s part of her self-appointed mission to tag as much of the Capital as possible. Want more? Have a look…

Carry on up Brick Lane and you’ll stumble upon a true graffiti icon. Star Yard Car Park, in between Fournier and Fashion Street is one of the most popular art walls in Shoreditch and an established, go-to spot for street art lovers. The artwork is constantly changing and evolving, and every visit will throw up something different ­– so it’s always worth popping in to see what’s new. Discover more, here

A bit further on to Heneage Street, and you can’t miss this gorgeous mural by Mr Cenz, one of London’s most exciting urban artists, whose use of bright, vibrant colours and swirling designs contrasts brilliantly with its two tone, angular setting. Featuring flowing letterforms and abstract shapes, his works of genius are full of vibrant movement and can be seen all over London, if you know where to find them. Fancy a bit of a peek? Go on then…

Onwards and upwards to Osborn Street and there she is, the legendary Amy Winehouse, sitting pretty on a red post box, painted by veteran Paris-based French street artist C215. It’s one of six multicoloured stencil works of music idols dotted around London, featuring the likes of Keith Richards, Lemmy from Motorhead, French Rapper Booba and Iggy Pop. Want to see more? Let’s rock!

And there we have it. A mile of must-see street art in one of the coolest neighbourhoods in the UK’s biggest city. But if you’re not in the Big Smoke, you can still drink in a refreshing draft of edgy awesomeness, wherever you happen to be. Like Northern Monk’s Patron’s Project massive mural on Globe Road in Leeds… 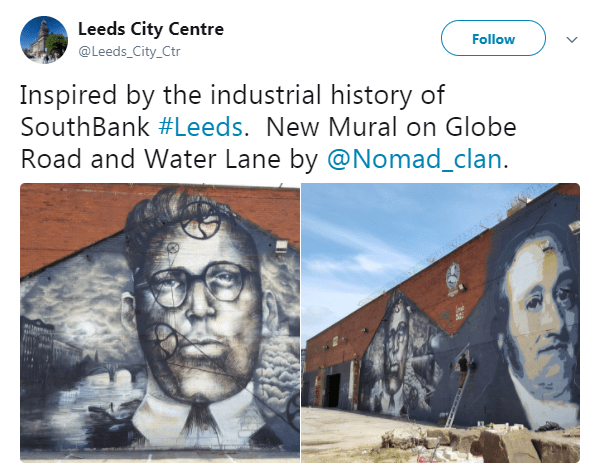 Inspired by the industrial history of SouthBank #Leeds. New Mural on Globe Road and Water Lane by @Nomad_clan. pic.twitter.com/9XjjpTmvp3 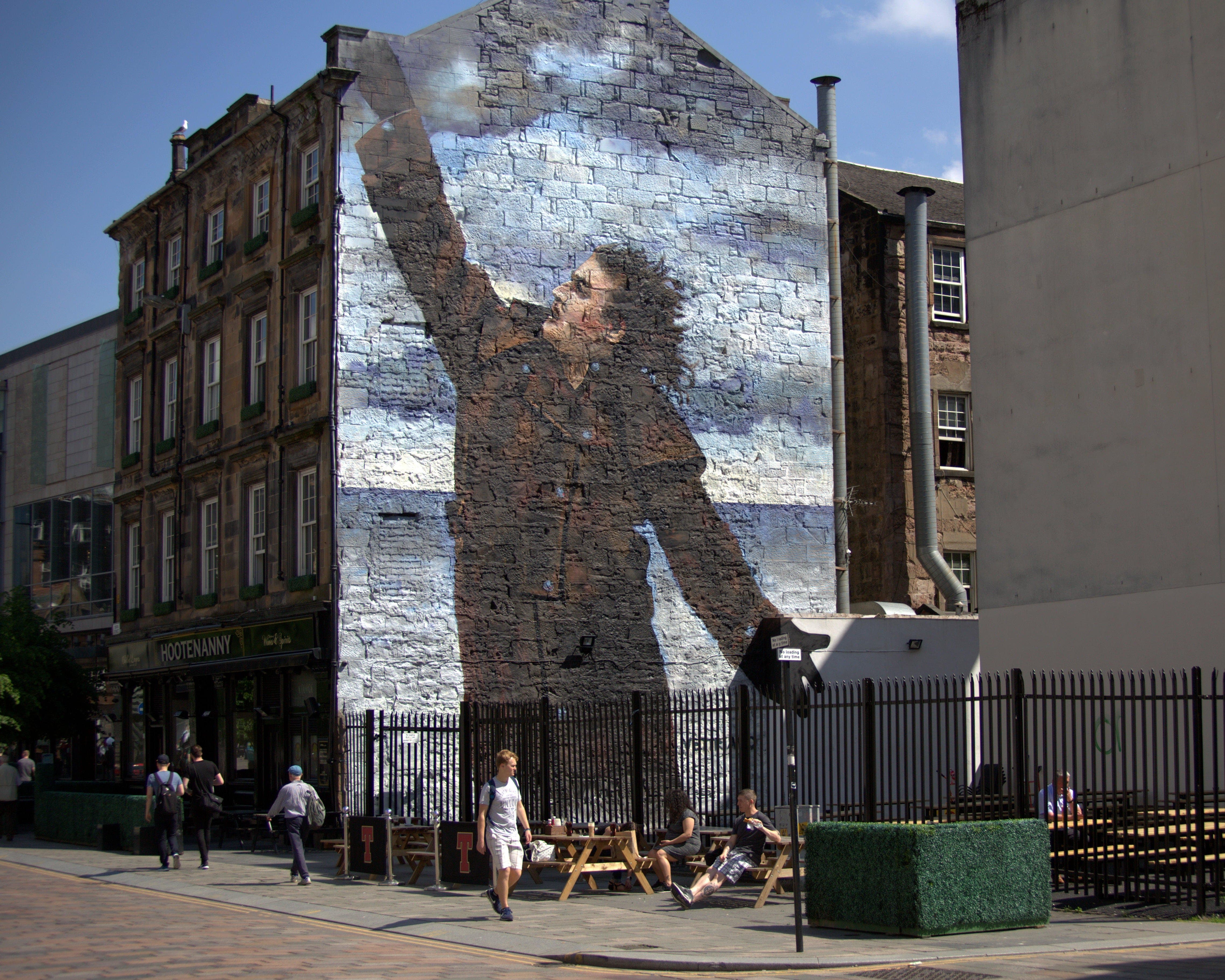 …and Phlegm’s City Bottle on the Swan Buildings in Manchester. 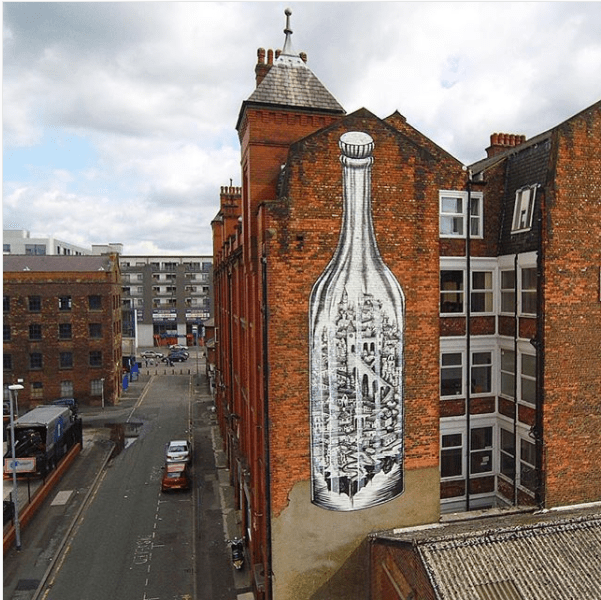 Cities of hope 2016. Cable st Manchester UK. @citiesofhope #phlegm #citiesofhope Thanks to @chopemdownfilms for the photo.

Of course, that’s just the tip of the iceberg. There’s a ton of top art out there, just waiting for you to stumble upon. You may even spot some Perrier inspired work like these on your travels (if you do, let us know, we’d love to see them). 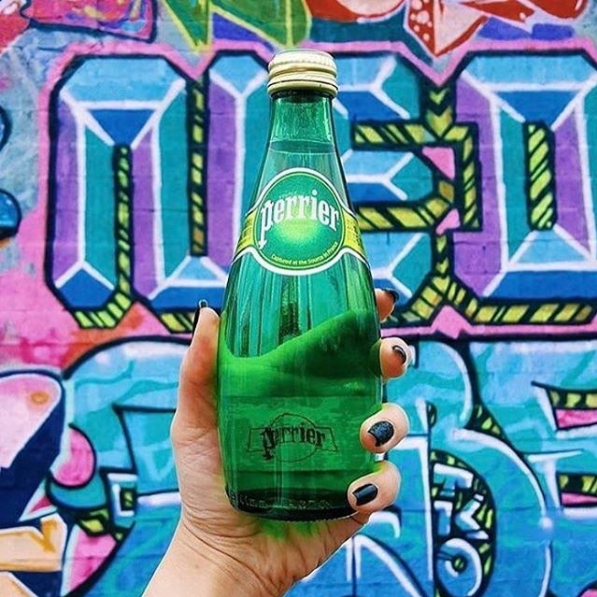 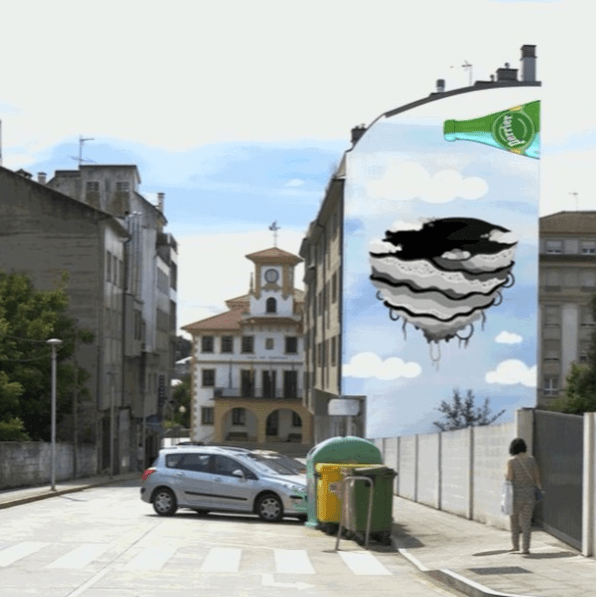 And if you fancy your hand at a spot of street art (without getting your hands too dirty) there’s an app for that called sketchar which let’s you create digitized graffiti gorgeousness.

We’ve even had a go ourselves – at our brilliant Pique-Nique launch party in June, a graffiti artist called Alex Odisy created the Perrier art installation below, while partygoers’ watched him work. 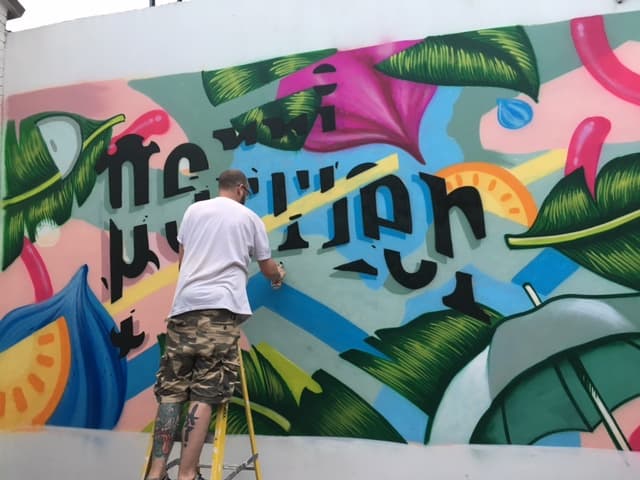 So, what are you waiting for? Get yourself out and about to discover and create something truly extraordinaire.